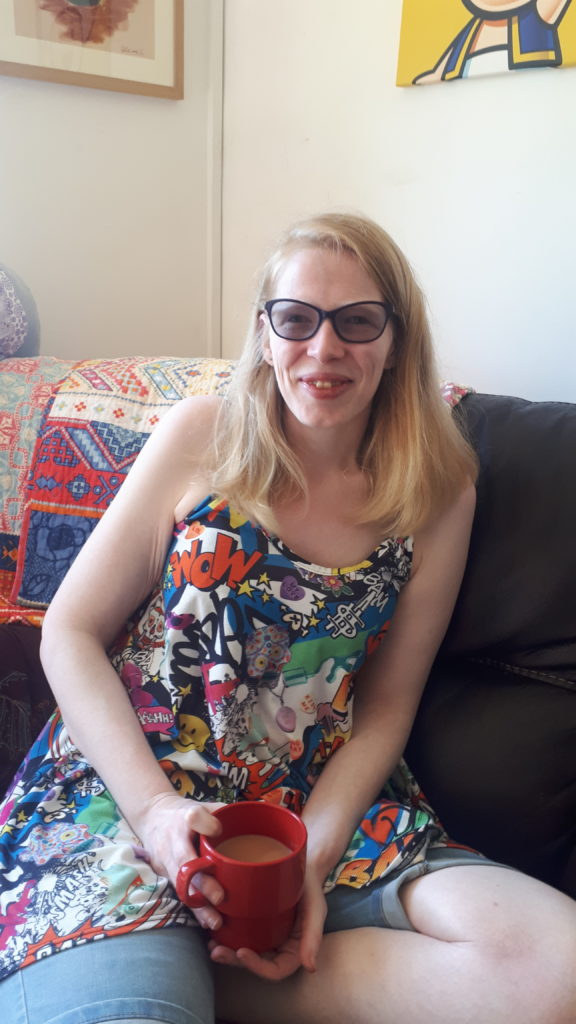 As part of this year’s Volunteers’ Week, Volunteer Support Coordinator, Vicky, shares her reflections on her time at The Clock Tower Sanctuary.

So, Vicky, tell us how you got involved with volunteering at the day centre.

I came to Brighton as a student but had been out of the area for a couple of years. Since coming back I was looking for some volunteering opportunities that were a little bit different. I’d always worked with young children, but had been really touched working with families that had suffered with deprivation, so I kind of wanted to pursue that angle a little bit more. And I knew Angelika, she’d volunteered at Clock Tower and just got her role so she encouraged me to come and volunteer – I’ve been here ever since!

What kind of thing do you help clients with?

Generally a bit of everything! I’ve done a lot of laundry! I’ve done a lot of chatting about lived experiences. Because I use a visual symbol of disability, I think clients feel quite comfortable talking with me about disability. This has led me to do quite a lot of PIP (Personal Independence Payment) and benefit support work. I’ve been to doctors’ appointments, even been to court with one client. Then just listening, I think that’s what I’ve done a lot of at Clock Tower. That’s what comes from standing around the washing machine doing all that laundry…

You’ve been volunteering for over two and a half years now – what do you think about the relationship between volunteers and young people?

You can see the development of the centre over the time I’ve been there. There’s a lot of reflection from everybody. The volunteers are there for a long time, I’ve been there longer than some, but there are people that have been there longer than me. I think that’s reflected because their skill level is really high, and that builds the centre up – there’s a level of skill in the staff and the volunteers that helps those clients that come through the door and makes them feel safe.

Because the volunteers have fixed days, there might be clients who only come in on a Tuesday because they know a certain person’s around for that consistency. I think that’s really nice, it means they build up relationships with volunteers. I had a client who I’d not seen since pre-pandemic, and had stopped coming in for a while, but when he returned and saw me was like “Hey – it’s you! You’re still here!” – I think that’s great. It’s nice that although clients get to a point where things might be OK, if things get to a point where they go wrong they know they can come back and ask for help.

You’ve continued volunteering throughout the past year’s pandemic – how has that been?

Previously, helping with practical things in the centre would lead to conversations quite naturally. As use of the centre has been more targetted due to restrictions, you have to jump right in with some of those intense conversations with people. Particularly because I’ve been remote working, a lot of what I’ve been doing is phone calls, so it has been going “Are you OK? Do you need anything?”. It has been that more emotional support – which is quite challenging… It’s leading straight into the urgent work rather than the more casual chatting, which is great but all of those other little bits are all of the life skills and I think that’s the thing that’s missing.

What else do you think makes The Clock Tower Sanctuary unique?

It helps young people work on creating a foundation to move forward with, it’s not just about helping them in crisis. It’s about developing skills that you can build upon in lots of different areas not just that immediate panic. I think that’s a beautiful thing. It’s about some of those more serious things as well, yes, it’s about finding a home, but then for people who’ve got anger issues it’s looking at ‘why do you get angry?’ or ‘why do you struggle to maintain relationships?’. It’s waiting until those clients are ready to ask those questions, and helping them work through that – which I think’s great.

What have you learnt in your time at the centre?

I have more empathy. I’m more patient and I’ve learnt to have a bit more confidence in myself and respecting my own opinions. Clock Tower have respected my opinions which has given me confidence in myself – that’s a really nice thing! Because the centre and the staff listen to the volunteers’ views it helps create a stronger relationship within the team (which is why we stick around)!

Thanks for sharing your thoughts Vicky! Any last words?